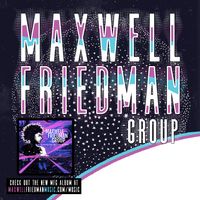 Parallel 44 Presents is excited to announce the return of British boogaloo machine The New Mastersounds on Wednesday, October 2nd at The Domino Room. The epic jazz/funk wizardry of Maxwell Friedman Group will kick off the show. Tickets go on sale Thursday at 10AM at bit.ly/NMS-MFG. Get your tickets soon, while you can ! Show Info: Doors 8:30PM. Show 9PM. 21+.

About The New Mastersounds: The New Mastersounds have been delighting audiences with their infectious brand of funky soul-jazz since they formed in Leeds, UK, in 1999. Though they have collaborated over the years with such musical luminaries as Maceo Parker, Fred Wesley, Corinne Bailey Rae, Art Neville, Quantic, and Lou Donaldson, they are at their best on stage as a tightly-packed quartet – bass, drums, guitar and Hammond organ - firing scorching funk grooves off each other and feeding off the energy of the joyful dancers in the front row.

About Maxwell Friedman Group: 15-year-old Maxwell Friedman is living proof that some musicians are indeed “born with it." At a very young age, his tasteful yet ferociously inspired keyboard playing and compositions are already becoming legendary and his skill, knowledge, taste, phrasing and artistry are already on-par with many accomplished players on the national scene who, without hesitation, call him their peer. One of the youngest players to have ever been endorsed by Hammond Organ, Maxwell has already been invited to share the stage with many musical heavy hitters such as Karl Denson, George Porter Jr., The New Mastersounds, Skerik, Pigeons Playing Ping Pong, Michael Franti, The Werks, ALO, Scott Pemberton, and many more. This young wunderkind’s star is surely on the rise!

Maxwell was just 9 years old when he first discovered a dusty Hammond M3 in the corner of his piano teacher’s garage. The sensation of moving the drawbars and hearing the Leslie spinning next to him was a magical moment that changed the course of Maxwell’s life and set him on his current musical trajectory. At age 11, he met famed organist Tony Monaco and began an educational journey with Tony as his organ mentor. With the tutelage and guidance of many veteran musicians over the last few years, Maxwell quickly began developing his skills and outlook in every direction possible, and before long was composing his own 21st century standards of Jazz/Funk. At 12, Maxwell even gave a TEDX talk about how music has empowered him in all aspects of his life. Now 15, Maxwell has teamed up with other talented Jazz/Funk players in his home state of Oregon and in early 2018, he launched The Maxwell Friedman Group, featuring bassist Mark Karwan, drummer Connor Streeter and guitarist Gabe "Brother Gabe" Johnson. The band delivers what Maxwell likes to call “Inspired Neo-Jazz Funk Soul Fusion” and this young man not only has shown a maturity beyond his years in leading elder musicians, but also continues to write and create like there’s no tomorrow.

Maxwell has just released his debut album, "Beyond Neblar - Live in Bend" recorded at McMenamins Old St. Francis School in his hometown of Bend, Oregon.